I Made Mistake to Have Attacked Wizkid…Skales 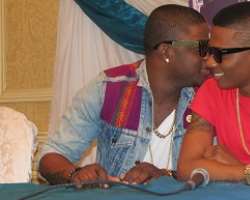 Nigerian singer, Raoul John Njeng better known as Skales, has admitted that trading words with fellow singer, Wizkid, was one of the greatest mistakes he will ever make.

The singer made this known on Multi TV's 'Let's Talk Entertainment' programme, as he explains that he now sees him growing in the eye of many considering the fact some other people look up to him as a role model.

"That's one of the mistakes I made and I feel like I'm growing in the eyes of the public so definitely, I know that you can never benefit from things like that. So I've become a better person now, I'm more grown now, I've realized that I'm a role model, a lot of people look up to me and so there's some mistakes I cannot do," Skales Said.

Meanwhile, with the ongoing allegations of song theft in the country, Skales, noted that he is so certain that nobody can steal his intellectual property and if anyone does, he will not spare the fellow.

Warning about lyrics theft, he said, “if you steal my lyrics, I'm coming for you.”