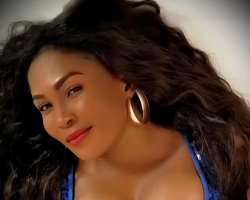 Only Genevieve Nnaji can make me throw caution to the wind and become a lesbian, but fortunately she is not,' these were the shocking confessions of Actress Ruth Eze in a recent interview with
The Sun Newspapers.

Since Ruth, University of Benin graduate came into the movie industry few years ago, her profile has always been on the rise and today she's one of the fastest-rising actresses.
Reacting to the rise of homosexuals in Nollywood, the Imo State born script interpreter insisted that she would never be pushed to be a part of such immoralities but her burning lustful passion for Genevieve Nnaji can make her have a re-think.

She continued; 'I'm obsessed with Genevieve. She makes me wet. If she tells me to become her partner today, I'll apologize to God and jump at the offer. Anyways, I'm not a Lesbian but I am not against them. If they believe they can stand the consequences, they can do whatever they like with their bodies. I have good boobs that both men and woman admire and can't seem to take their eyes off me. My fellow ladies always harass me to get intimate with them, but I haven't tried such.'