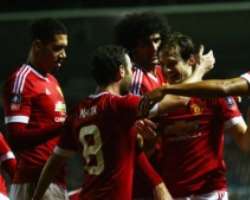 Louis Van Gaal is safe. For now.
With the pressure mounting, Manchester United eased by Derby County in FA Cup 4th Round action with a 3-1 win. Wayne Rooney scored in the first half, and while Derby leveled things before halftime, Daley Blind and Juan Mata grabbed second-half goals to put the Red Devils through.

With his job on the line, Van Gaal started a very strong lineup. As a result Manchester United owned much of the meaningful possession, and while Derby threw men forward as the second half wore on, it only allowed United a way through. Anthony Martial was fantastic in the attack, directly assisting both Rooney's goal and Mata's score.

The draw for the FA Cup 5th Round will be on Sunday.

Next up for the Dutchman, Van Gaal must face a difficult Premier League stretch where the club is set to face Stoke City, Chelsea, Sunderland, and Arsenal in its next four matches. Manchester United also has its Europa League Round of 32 matchup with Danish side Midtjylland, which could prove costly should they falter.