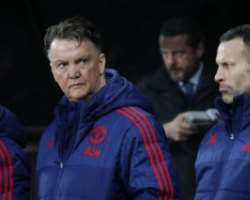 “It’s not easy to fire van Gaal. The question of who will follow is a very difficult one to answer.”

That was Louis van Gaal talking about his own future at Bayern Munich in March 2010, just a month before he lost his job. The season before – his first in German soccer – he had led the storied club to league and Cup glory while Bayern reached the final of the the Champions League, pipped to the crown by Jose Mourinho’s Inter Milan .

How quickly, how sharply, the whole damn thing unravelled. Though in those last few days, van Gaal – normally so cocksure and arrogant – was resigned to the inevitable. Bayern were in fifth place in the Bundesliga table and though there was a halfhearted attempt to placate him and keep him until the end of the campaign, it didn’t last long. After a 1-1 draw against lowly Nurnberg, Bayern took decisive action.

Now Manchester United are in a similar situation. Cast adrift of the top-four, there’s a genuine possibility that the club could miss out on marquee European soccer for the second time in three years.

As in Bavaria, it’s difficult to pinpoint exactly how things have deteriorated so rapidly.

Certainly, van Gaal’s first year in charge proved difficult, though there was a season-saving purple patch when United won six consecutive Premier League games across last March and April, sweeping aside Tottenham, Liverpool and Manchester City in quick succession. It was enough to secure fourth place and van Gaal had achieved the bare minimum. It mattered little that from United’s final six fixtures they won just once. The target had been met. It was a foundation.

In a results business, United started well this term – 10 wins from their first 14 games in all competitions. But then, a shift.

Expectedly, the burden of responsibility became too much for Anthony Martial ‘s young shoulders, Wayne Rooney ‘s miserable form showed no signs of improving and the limited supporting cast struggled to step up. In the absence of any other goal-getter (van Gaal notably purged British record signing Angel di Maria and the crafty Javier Hernandez during pre-season), United hit a wall. From their next 15 games, they won just three. Acknowledging his side’s inability to find the net, van Gaal concentrated on frustrating opponents instead. If United couldn’t win games, they weren’t going to lose them. From 10 fixtures, they allowed just three goals.

Then came a toxic December which started with them needing to chase goals and a victory in Germany to retain their Champions League status. Drawn out by Wolfsburg, they suffered accordingly. The hangover stayed for a month and after a 2-0 away loss to Stoke, van Gaal had seen enough. It was a fourth straight defeat, his summer signing Memphis Depay committed an awful error to gift Stoke their opener, while captain and the oft-inspirational Rooney had been benched.

Afterwards, van Gaal had nothing left but anger and frustration. Pent-up, he criticized his players and offered withering looks to the television reporters brave enough to ask him about his future.

Though admitting he’s used to the scrutiny, van Gaal has cut a different persona in recent weeks and understandably so. There’s one key difference between his spells at United and Bayern, and Barcelona before that: in Germany and Spain, he tasted success before eventually being forced out.

For a proud and stubborn man, to be sacked halfway through a three-year contract with such a storied club cannot be classed as anything other than unmitigated failure, and even in his managerial dotage he’ll be desperate to avoid such an ignominious and undignified stain on his proud legacy.

Van Gaal doesn’t appear resigned just yet. There’s still an edge to him and he’s got colder in his relationship with the UK media in recent weeks – a clear response to their merciless, relentless gossip-mongering.

The latest rumour had him offering his resignation to United CEO Ed Woodward following a 1-0 defeat to Southampton last weekend. Reports suggested he’d first attempted to walk away after the Stoke loss. But those who have followed van Gaal closely throughout his career have countered that he always does what he wants. If he wanted to quit, he would’ve merely pressed the trigger. He’s not interested in posturing or bowing to others’ wants and desires.

He’s a shrewd man too. He will be aware of the lack of alternatives should he step away. If he’s sacked, who does United go to next? That’s Woodward’s decision and it will prove a big dilemma for him and the club.

Having served as a coach since the summer of 2013, Ryan Giggs has remained at United rather than seek managerial experience elsewhere. After David Moyes was sacked, he was parachuted in as interim boss to take control of the final four games of the 2013/2014 campaign. An assistant to van Gaal currently, it seemed the 42-year-old was being primed to eventually replace the Dutchman in 2017 but how will that plan change should van Gaal leave earlier than originally expected?

With Jose Mourinho available and Pep Guardiola on the market too (though it’s widely believed the Catalan has verbally agreed to take over at Manchester City in the summer), Woodward’s problems don’t ease by getting rid of van Gaal, owing to the chain reaction it might spark.

Giggs was linked with the Swansea job earlier this season and would have a long list of clubs interested in his services should he decide to leave Old Trafford after almost 30 years there. If he’s overlooked by the top brass he won’t stay around, desperate as he is to properly begin his own managerial career. Furthermore, the whispers at United are that Woodward is reluctant to cede such control to a fabled figure of United’s past.

At Thursday’s press conference in advance of their FA Cup clash with Derby, van Gaal remained defiant about his future, describing the latest stories about offering to step down as “awful and horrible,” claiming the media had already “sacked” him three times this season.

Another defeat and the same condemnation will be delivered with the usual gusto. A victory will buy van Gaal some time. That, we can predict.

But the most worrying thing for United is that like any imposing organization, one key decision has such grand and incalculable ramifications.