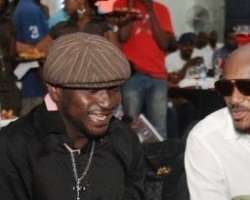 When we had thought that the 2016 beefs amongst music starts is over, Blackface of Plantashun boiz fame opened can of worms on Tuface Idibia and Wizkid.

The Benue state born singer had earlier slammed Wizkid for allegedly stealing his song and remixed it into 'Ojuelegba'.

Then a while ago, he also took to Twitter to call out his former group member, Innocent Idibia AKA 2baba for stealing his 'Somebody Loves You song'

"Suddenly your manager Efe Omorogbe is a song writer of my song? So you can split p?publishing 4ways with Bridget Kelly? With my name miss spelt?

Since you decided to hide, you know I still will let you know a piece of my mind, Official 2baba and we'll meet in court about the publishing.

All said and done with! You not ask that you want to record my song? I was out there in the wilderness and you never called because you wanted me dead so that my properties be yours," he wrote.

Meanwhile, when Nollywoodgists.com contacted the 'Erima crooner', ?via BlackBerry Messenger, he explained the major reasons he is out for the two popular music stars.

?"It's never a wrong time to fight copyright. I have endured enough. This is the right time,' he wrote.
All other questions forwarded to him was read but not replied.