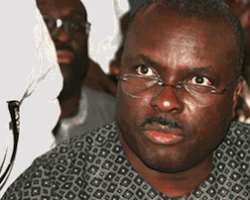 The pendulum of justice is gradually tilting in favour of former Governor of Delta State, Chief James Ibori, and his associate, Bhadresh Gohil's call for an independent investigation is mounting, with the British Broadcasting Corporation (BBC), The Sunday Times of London and the Guardian of London, reporting on it.

The BBC reported today that the latest call for an independent investigation on the bribery and corruption allegation leveled against the Metropolitan (MET) Police by Gohil is coming from Simon Natas, a defence solicitor.

Similarly, the influential Sunday Times of London, writing under the headline 'Police bribery hushed up billionaire trial' said 'The Crown Prosecution Service (CPS) is facing serious questions over an alleged cover-up that could jeopardise the high-profile conviction of a billionaire Nigerian politician.

'The crisis follows the dramatic collapse of a case involving Bhadresh Gohil, a lawyer who represented James Ibori, a former governor of Nigeria's oil-rich Delta State. Gohil was cleared at Southwark Crown Court last week after the CPS withdrew a charge of perverting the course of justice.

'Gohil had been accused of leaking fabricated documents to media organisations and MPs on the Home Affairs select committee. The documents claimed a police officer involved in the Ibori inquiry had received corrupt payments from RISC Management, a private detective agency that worked for Ibori.

'The decision to prosecute Gohil backfired when CPS lawyers were accused of withholding key documents, which could have proved police corruption.'

Lawyers are alleged to have covered up evidence that police received corrupt payments from a firm of private investigators in return for confidential information.

'The accusation has been made in the trial of two men charged with fabricating claims of corruption involving Metropolitan police officers. The trial collapsed last Thursday at Southwark Crown Court in London after senior lawyers at the Crown Prosecution Service (CPS) decided to abandon the case. The CPS said new information had come to light, but did not elaborate. It did not comment on the allegation of serious misconduct.'

It will be recalled that during a long-running trial in London, which has now been abandoned, a court was told there was 'compelling evidence' officers had received bribes.

During the trial, Mr Gohil had been accused of perverting the course of justice by faking documents to make it look as though Scotland Yard detectives were taking bribes.

But his defence lawyers said that, far from this, and even though Mr. Gohil had separately pleaded guilty to money-laundering, he was trying to expose corruption within the Metropolitan Police.

Speaking to the BBC after the trial was abandoned on Thursday January 21 2016, Mr. Gohil said he felt vindicated.

'I was a whistleblower and instead of investigating what I had uncovered and put forward, I was persecuted,' he said.

'Serious questions'
The case goes back more than four years, when Mr. Gohil anonymously sent documents to public officials and journalists. Among the papers were what purported to be invoices detailing payments to confidential sources - bribes for Metropolitan Police officers, it was claimed.

In court, defence lawyers alleged there was 'clear and compelling evidence' of police accepting bribes in return for 'unlawfully providing sensitive information' to private detectives.

It was also alleged that Scotland Yard's own investigation into the affair was 'deliberately designed to find no evidence of corruption' and that the prosecution service 'deliberately withheld evidence' which undermined their case, 'misleading the Court of Appeal' in the process. These allegations were disputed.

Reacting to the prosecutor's dramatic decision to drop the trial of Gohil, Natas said, 'we consider that there are very serious questions for both the director of public prosecutions and the chief commissioner of the Metropolitan Police to answer about all aspects of this affair.'

Scotland Yard has said that the allegations of corruption were investigated but no misconduct was identified. The CPS has confirmed only that the case against Mr. Gohil has been dropped.

It would be recalled that last Thursday, the London Metropolitan Police met with a dramatic set back in the case between it and Chief James Onanefe Ibori's associate. At the Southwark Court, London, on 21 January 2016, the Director of Public Prosecution in the United Kingdom sensationally applied to the court to drop the case against Mr. Bhadresh Gohil, one of Ibori's lawyers. Mr. Gohil had maintained his allegations that the London Metropolitan Police Officers investigating Chief Ibori and others were involved in bribery and corruption.

That Thursday, the Crown Prosecutor, Ms. Sasha Wass, amplified the Prosecution's position, saying that the UK authorities were no longer interested in pursuing the attempt to pervert the cause of justice suit they had brought against Mr Gohil over the allegations. Mr. Gohil had maintained his allegation that Metropolitan Police Officers investigating James Ibori and others were involved in bribery and corruption.

Sasha Wass further stunned the court when she said she was not at liberty to disclose the reasons behind the Crown's decision to drop the case. However, it is on record that in the run up to the hearings, Ms. Wass was directly accused by Gohil's representative, Mr. Stephen Kamlish, of lying to the Court of Appeal and also lying to His Honour Judge Testar at the Southwark Court and disobeying his order for the Crown to disclose evidence in their possession which include the bank statements of Detective Constable John McDonald to the Defence before the start of the trial.

Ibori's big win during Thursday's proceedings is that Judge Testar immediately ordered that all the material the prosecution had withheld from the defence be made available to Ibori and all his associates' legal teams including those of Christine Ibori-Ibie and Udoamaka Okoronkwo-Onuigbo.