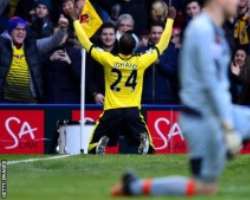 Odion Ighalo rediscovered his scoring touch as Watford won their first league game in six with victory over struggling Newcastle at Vicarage Road.

The Nigeria striker went into the game without a goal since 28 December, but finally notched his 14th when he beat the offside trap to slot in Troy Deeney’s through-ball.

He then set up Craig Cathcart, who drove in the second from six yards.

Jamaal Lascelles headed home in the 71st minute to set up a tense finish.

The Magpies remain in the bottom three with 21 points, while the Hornets move up to 10th with 32 points.

For the sceptics who thought Watford’s Odion Ighalo had run dry, the persistent and hardy Nigeria striker proved them wrong today.

The Magpies kept the Hornet quiet in the first half by cutting off his supply line from midfield – a tactic similar to that employed by Southampton a couple of weeks ago.

But 44 seconds after the restart Newcastle switched off and allowed Ighalo to escape from their clutches. The 26-year-old checked his run before latching onto Deeney’s pass and rounding keeper Rob Elliot to score.

The Magpies started with Aleksandar Mitrovic in attack – their £13m summer signing, who arrived to a fanfare from Anderlecht, but has repeatedly misfired.

In the first half, he found himself one-on-one with the final defender but did not have a guile to pass him. He also had another sidefoot effort saved by the foot of Heurelho Gomes.

While Ighalo would have blocked those missed chances from his mind, Mitrovic retreated into his shell after the break. It’s now only four goals in 25 matches for the Serb.

The Magpies might need to spend again on a striker.

That is what Newcastle head coach Steve McClaren said after the match.

But this is a club who have spent about £80m in two transfer windows, so why is there still a problem in attack and defence?

Aside from Mitrovic, another summer signing midfielder Florian Thauvin has been a flop, while 21-year-old central defender Chancel Mbemba has barely had time to find his feet after been given the task of partnering Fabricio Coloccini, whose form has been inconsistent. The Argentine was at fault for Ighalo’s goal today.

Watford boss Quique Sanchez Flores brought in 16 players in the summer, and has managed to produce a side who look as if they have played with each other for several seasons.

The Hornets will be glad to have ended their winless run, and are now only five points off fifth. With this spirited team, Flores will fancy his chances of finishing in a European spot.

Watford boss Quique Sanchez Flores: “We played very well – it was an energetic team. It was difficult against Newcastle.

“It was a crucial match during the season – Newcastle are trying to avoid the same position as us [relegation]. We have got more of a gap to Newcastle now.

“Half time today is the period where we tried to correct things. It was important to score quick and then score the second goal.

“Deeney and Ighalo always play well. Today it was important to play Deeney, Ighalo and Jose Manuel Jurado together.”

Newcastle manager Steve McClaren: “We started the game so well and looked in control. The two goals really killed us. It’s disappointing – we fought and came back. We threw everything at them – it wasn’t our day.

Watford 2-1 Newcastle: We threw everything at them – McClaren

“We talked about focus and the first 10 minutes being important – [referring to the first goal]. The second goal was from an aimless cross into the box. We then had a mountain to climb.

“Apart from the two goals – the performance was terrific. We’ve got to get it right at both ends. We’ve had a tough Christmas. The last few results we’ve been growing and getting better. We lick our wounds and go again.”