Obama hits Republicans with rhetorical hammer: 'It's terrible and on fire and covered in bees' 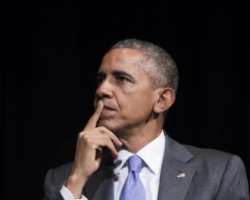 Barack Obama
US President Barack Obama on Tuesday brought down a rhetorical hammer on the Republican presidential field for what he painted as apocalyptic rhetoric about the US economy.

“They don’t know what they’re talking about. They’re peddling fiction during a political season,” Obama said during a speech in Detroit.

“It’s strange to watch people try to outdo each other in saying how bad things are,” he added. “When one says our economy is terrible, another says it’s terrible and on fire and covered in bees. They’re racing to see who can talk down America the most.”

The president touted the 2009 bailout of the auto industry as an example of the economic recovery under his watch, saying that many of the Republican presidential candidates were “the same folks who would’ve let this industry go under.”

“When I hear today some of these folks running for president who can’t bring themselves to admit what you guys have accomplished, I don’t want you to take that seriously,” Obama said. “Because when you ignore the progress we’ve made, you’re not going to make good choices about where we need to go in the future.”

The president’s comments come as the administration has attempted to shape the legacy of Obama’s two terms in office, dismissing detractors and touting economic metrics such as low unemployment that the administration says vindicates the success of its policies. But they also came on a day during which the stock market plummeted, with markets ultimately settling off their major lows .

In his final State of the Union address last month , Obama chastised critics who said that the US has gotten weaker under his watch.

“The United States of America is the most powerful nation on earth. Period,” Obama said. “It’s not even close.”

He added:
We spend more on our military than the next eight nations combined. Our troops are the finest fighting force in the history of the world. No nation dares to attack us or our allies because they know that’s the path to ruin. Surveys show our standing around the world is higher than when I was elected to this office, and when it comes to every important international issue, people of the world do not look to Beijing or Moscow to lead  —  they call us