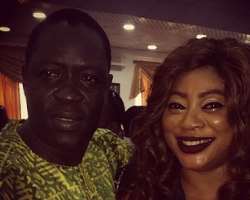 The Yoruba people are one lover of culture and tradition as they continue to respect those who have tried to preserve that culture over time despite the emergence of other religion.

Since the coronation of the new Ooni of Ife kingdom, many people have continued to storm the palace to congratulate the new king and to offer advice to him.

Being a good and respected king, he has this opening hands of fellowship and that has made his people love him within his short period of ascending the thrown as recently, Nollywood actors, Taiwo Hassan better known as Ogogo, Alesh Onilegbale, Ayo Adesanya and others, paid the new Ooni a visit.

According to Ogogo, he said, “Well, you know I have been a king in so many films, well, this is the king of kings. The Yoruba descendants know where we hail from Ife. I reckon with whom it's due to reckon with.”