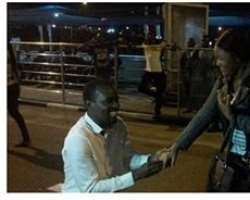 Aside the beefs going around in the Nigerian entertainment industry, there are some areas where there is happiness and many hope that this happiness will abound as the day unfolds.

In January 1st of the New Year 2016, Raper Eva Alordiah, got proposed to and just some weeks ago, singer, GT Da Guitarmen, proposed to his long time lover and now it is good news for Yoruba actor, Tunde Owokoniran, as he has proposed to the woman in his life, Oluwatunmise Akinwinsola.

The actor, who was so elated on getting the “Yes” response from his lover could not hide his feelings as he announced that he never believed that an imperfect man like him could find true love.

“I am Mr IMPERFECT but molao1 made me realize falling in love is not by finding the perfect person, but by loving an imperfect person perfectly. You have always stood by me as a friend, soulmate, companion and more which words can't describe. Oluwalontunmise you are my heaven sent ,you believed in me, I don't know how I managed to impress you because I strongly know I don't deserve an ANGEL like you, I promise by the special grace of Allah you won't have a reason to regret your actions. Love you now and always my Mz Tilapia. Steps, love. She said YES. Future Mr & Mrs,” he wrote.