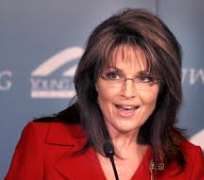 The only two leading Republicans who have both run for the White House and starred in their own reality television shows stood side by side in Iowa Tuesday night, vowing to steer the 2016 Republican primary nomination away from the establishment. Palin — the vice presidential nominee who first tapped into anti-establishment fervor and was similarly discounted by pundits and politicians alike as a joke before exploding as a political force — endorsed Trump on Tuesday night at a rally in Ames, Iowa.

“Things will change under President Trump,” Palin declared at the event, where she also slammed Obama’s foreign policy as well as the GOP establishment.

“Now what they’re doing is wailing that, ‘Well, Trump and his trumpeters, well they’re not conservative enough.’ Oh my goodness gracious, what the heck would the establishment know about conservatism?” she said.

The former Alaska governor’s official backing is perhaps the only politician’s endorsement that could boost Trump as an outsider: In her heyday, Palin’s conservative celebrity rivaled Trump’s. Now that he’s a contender in a race where many candidates have cast themselves as conservative crusaders ready to take on the establishment, a nod from the original crusader — “Mama Grizzly” — carries clout.

Palin’s overwhelming popularity in conservative circles may help boost Trump, who is neck-and-neck with Sen. Ted Cruz in Iowa polls just 13 days before voters make their choice in the state’s caucuses. Palin’s choice is a pointed rejection over Cruz, a candidate she endorsed during his Texas senate reelection bid in 2012.

“I think it’d be a blow to Sarah Palin, because Sarah Palin has been a champion for the conservative cause, and if she was going to endorse Donald Trump, sadly, she would be endorsing someone who’s held progressive views all their life on the sanctity of life, on marriage, on partial-birth abortion,” Cruz campaign spokesman Rick Tyler said on CNN on Tuesday morning before the endorsement.

Donald Trump says Sarah Palin could ‘play a position’ in his administration 4:19

But despite Cruz’s attempts to cast Trump as a conservative mirage, Palin’s endorsement might actually help Trump overcome voters’ anxiety about his Democrat roots: Palin is most popular among her party’s far right, according to the most recent favorability ratings from 2013, and she will bring some added credibility among those who might be buying Cruz’s narrative.

Palin’s daughter Bristol penned a post speculating that Cruz’s campaign’s preemptive jab at Palin was precisely why she hoped her mother would endorse Trump.

“Cruz’s flip-flop, turning against my mom who’s done nothing but support and help him when others sure didn’t, shows he’s a typical politician. How rude to [sic] that he’s setting up a false narrative about her!” the younger Palin wrote in a blog post. “America doesn’t need that.”

Palin tweeted the line, as did Trump’s campaign manager. Cruz later tweeted out praise of the former vice presidential nominee in hopes of downplaying these attacks.

But despite Cruz’s attempts, Palin and Trump’s relationship has been decades running: One of Palin’s first appearances in the national media was when the then-commercial fisherwoman attended an appearance by Trump’s ex-wife Ivana Trump at a local department store during the launch of her perfume line.

“We want to see Ivana,” Palin told the Alaska Dispatch News in 1996 , “because we are so desperate in Alaska for any semblance of glamour and culture.”

It was Palin’s first public nod of appreciation for the Trump brand, and it would continue for years: She defended him during his quest to get President Obama to release his birth certificate, and she has repeatedly slammed the media for their coverage of Trump. In 2011, she met up with Trump for a slice of pizza at New York’s La Famiglia restaurant in a much-touted “pizza summit,” where both famously and notoriously used a fork and knife to eat the greasy pie.