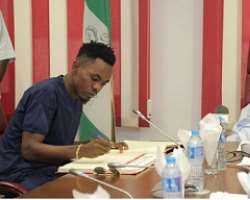 Recently, Korede Bello, was snatched by the Nigerian Police to be their ambassador, and the singer has been doing well in helping the force to campaign to the public. Now it is the turn of dance-hall singer, Patoranking.

Patoranking has nothing to do with the Police but this time with those that are more powerful than the Police which is the National Assembly.

The singer was in a round table talk with some Senators along with the Senate President, Bukola Saraki after which he was picture putting pen to papers and was given a gift.

He is yet to disclose what the discussions was all about but thanked God for starting the New Year in a good note.

“Another level, 100%, God is the greatest,” he wrote. Those on the round table talk were, Dino Melaye, Stella Oduah, Ben Bruce and others