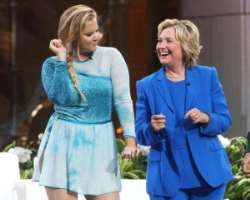 The Hillary Clinton of 2008 talked a lot about her qualifications and background as a lawyer, a United States senator, a first lady, a children's rights advocate — and very little about the fact that she's a woman. Even if she'd had a grandchild at the time, she probably wouldn't have been photographed pushing a baby carriage. If she'd been delayed returning from the bathroom during a debate break, she would have trampled three interns and a cameraman to get back to the stage in time.

The Hillary Clinton of 2016, in stark contrast, is a proud grandmother, confidently exercising her right to let the world wait for her , and above all, unafraid to acknowledge that in running she is making it possible for “fathers … to say to their daughters, 'You, too, can grow up to be president.'”

A pregnant Chelsea Clinton heads out for a family day walk with her parents, Hillary and Bill Clinton, along with her husband, Marc Mezvinsky, and their baby Charlotte. (Photo: Splash News)

So, what happened?
Lena Dunham happened. And Amy Schumer. Also Sheryl Sandberg, Gabby Giffords, the first female Army Rangers and all of women's soccer. All assessed in polls, discussed in strategy sessions with her aides and all pointing to the same conclusion: that if the United States is ready to see Julia Louis-Dreyfus as president, it's ready to elect Hillary Clinton. And, of course, something else happened: Donald Trump.

“The cultural moment is different for a female candidate for president than the one that existed as recently as seven years ago,” says Howard Wolfson, co-chief strategist and communications director for Clinton's 2008 presidential campaign , who now works for Bloomberg and is watching this one from the sidelines.

“There was no equivalent of a show like Girls with a frank depiction of what it means to be female,” he said. “There was no young woman carrying around the mattress at Columbia talking about issues of sexual violence, no Sheryl Sandberg pointing out that women are perceived differently when it comes to leadership, no Amy Schumer with a pop comedy show devoted to exposing sexism in the workplace and society. There is much more space for a conversation around gender discrimination and gender equality and just plain gender.”

Eight years ago, he says, the goal of the campaign was to prove that Clinton could win the election and do the job of president. Hence, “the fact that the candidate was female was not something we stressed.”

“When she first announced the last time, we spent at least six to eight months asking, 'Is America ready for a female president?'” recalls Donna Brazile, a longtime Democratic strategist who is now a commentator for CNN. “In light of all that, [the campaign] decided not to emphasize that she would be the first woman, rather they thought that her qualifications as commander in chief was the most important ingredient. They wanted to neutralize the gender card as much as possible.”

That might have been a misread of the electorate, Brazile and Wolfson now admit. The two most powerful images of Clinton's last presidential run were when she cried in a New Hampshire diner and when she exited with a speech that took pride in the “ 18 million cracks ” her candidacy had created in “the glass ceiling.” Or maybe in the long run it was the correct decision, and the reputation for toughness she cultivated then, reinforced by her subsequent tenure as Secretary of State, settled the question of her competence — freeing her to present herself now as a woman whose campaign carries as much symbolic weight for women as President Obama's did for African-Americans.