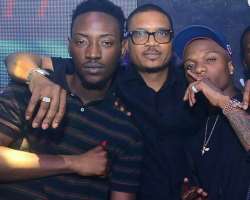 It's no longer news that Billionaire businessman, Aliko Dangote was behind the swift settlement of the beef between two top music lords, Don Jazzy and Olamide over the winner of Headies Next Rated Award.

Few weeks later, two other popular Artistes kicked off another hot verbal war which later resolved to face to face brawl that left Dammykrane in the pool of his own blood.

Just as their fans were busy cursing and abusing themselves over who is right and wrong, super Eagles striker Obafemi Martins came into the picture and quenched the fire that went ablaze at his Quilox party. He brought Wizkid and Dammy Krane to his VGC Mansion and resolved their rift amicably.

The soccer star even put up the photo on his Instagram page and captioned it; "It all started at my party on Thursday at Quilox and settled here at my house @wizkidayo and @big_daddy_krane are cool."

Innocent Nigerian music lovers are beginning to wonder what's really going on with these sudden fracas and the mode of settlement. Is it part of their publicity tactics for 2016? Or just an out pour of over bottled aggression? Which celebrities will be the next to throw tantrums at each other? Any idea?