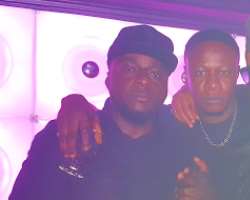 Some days ago, various social media platforms were agog with the news of two singers, Wizkid and Dami Krane, at Quilox club over the ugly misunderstanding that ensued between the duo and as many tried to understand what actually transpired, various versions of the brouhaha were surfacing online.

The fight has been finally settled but some faces of those who were present in the night having fun at the Obafemi Martins Black party has emerged with the likes of Tilaman, Chuddy K, Timaya and others were present.