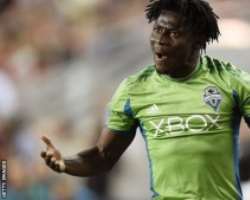 Nigeria striker Obafemi Martins has left the door open to a return to the English Premier League.

Martins has scored 43 goals in 84 appearances for Seattle Sounders since joining the MLS side in March 2013.

His form in the US earned him a recall to the Super Eagles squad after more than two years’ absence.

He has also attracted admirers in England, with Aston Villa making an approach for the player, according to Martins.

The striker says he rejected the approach from the Premier League’s bottom side.

Bournemouth, former club Newcastle, and Sunderland are all also reportedly interested in him.

“I love the English Premier League and you never know what can happen in football,” Martins told BBC Sport.

“I don’t know what’s going to happen tomorrow but I will never say never when it comes to going back to England.

“When I left Newcastle, I never forgot all about England and when the chance to return with Birmingham City on loan came, I took it.”

Martins burst into the international limelight at Italian side Inter Milan before switching to Newcastle in August 2006. He scored 35 goals in his three seasons with the Magpies.

The striker, who has also had spells in Germany, Russia and Spain, will be remembered for scoring Birmingham City’s winner in their 2-1 Carling Cup final victory over Arsenal in 2011. – the club’s first silverware since 1963.

“People still talk about it everywhere I go,” he said.

“I’ve won trophies elsewhere but that one was special to the club. You get the same feeling at every football club but in England. Football is very powerful.

“I enjoyed some amazing times in England and I will never close the door on a possible return.”

Martins has scored 18 goals in 41 international appearances for three-time African Champions Nigeria and was voted Africa’s most promising talent in 2003 and 2004.