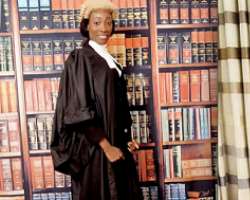 It seems what is trending most in Nigeria these days is missing budget and various beefs in the music industry where everyone is trying to stand out and make a name for themselves.

The crisis between Wizkid and Dammy Krane, is getting someone in the know to speak out and this time, the axe is falling on Wizkid, as legal practitioner and daughter of fuji singer, Wasiu Ayinde Marshal, Dami Marshal has just joined voice to accuse the singer of theft.

Dami, who was recently called to bar, recently revealed that she was there when the behind the scene of the recordings were done and as such, the singer does not have any right to yank off Dami Krane in his track.

She also accused singer, Iyanya, of content theft as she pointed out that they all know what is going on in the industry but just decide to take things easy.

The legal practitioner made it known that the issue of plagiarism was getting too much in the industry and she will soon come hunting the thieves one after the other as she is currently doing her Master Degree in intellectual property law.

According to Dami, "Kranizuu DK I am gonna carry this on my head because I know the behind the scene I was with dami that night he was the one I had a meeting with the day my lappy got stolen the boy called wizzy on phone I just dont wanna say what wizzy said I have the recording on my phone wizzy is a useless person. SAY NO TO OPPRESSION my father is one of the biggest acts in Nigeria he shows all this young artistes love he doesnt oppress anybody I have been in the system if k1 no they oppress anybody who is wizkid."