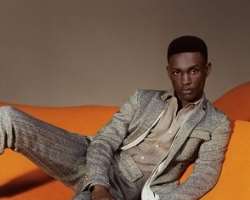 Victor first made the limelight when he won the Aquafina Elite Model Lookcompetition in Nigeria in 2014 alongside the female winner, Mayowa Nicholas.

Last season, he became the first Nigerian male model to walk at both Paris and Milan Fashion Weeks for top brands in the likes of Ermenegildo Zegna, Missoni, Hermès, Balmain, Kenzo and Haider Ackermann!

The Missioni Spring/Summer 2016 campaign aesthetic centres around ideas of sensuality and spontaneity.Its is designed with a myriad of references from Venezuelan street art to vast, abstract landscapes in mind, the collection marked a return to the house's sportswear roots. Silhouettes alternated between oversized and streamlined, but were all engineered in Missoni's trademark lightweight knit which, incidentally, caused controversy for its transparency back in 1967.