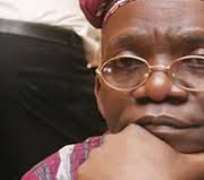 A human rights lawyer, Mr. Femi Falana (SAN) has said that there was no legal justification for the re-arrest of the immediate past National Security Adviser, Col. Sambo Dasuki (retd.), and the leader of the Indigenous People of Biafra, Mr. Nnamdi Kanu, after they were granted bails by different courts.

Falana, in a statement on Sunday, said as a President who won an election on the promise to fight corruption and end impunity, President Muhammadu Buhari was duty-bound to ensure that all organs and agents of government respected the law.

The senior advocate added that the President should restrain overzealous security personnel from engaging in impunity that could expose the government to undue embarrassment.

Falana said, 'One of the reasons why Nigerians voted for the candidate of the All Progressives Congress, Gen. Muhammadu Buhari (retd.), during the last general elections was his promise to fight corruption and end impunity in the country. Upon winning the election, President Buhari further pledged to abide by the Rule of Law.

'To that extent, he has a duty to ensure that all organs and officials of the government operate within the ambit of the law. In particular, he should not allow overzealous security personnel to engage in any form of impunity and thereby expose the government to unwarranted embarrassment.'

He said in the cases of Dasuki and Kanu, the only option open to government if aggrieved with the bails granted them, was to appeal against the court rulings.

'He was eventually charged with money laundering and criminal diversion of huge sums of public fund before the Federal High Court and the Federal Capital Territory High Court at Abuja. Notwithstanding the gravity of the offences, both courts have admitted him to bail.

'But after he had met the bail conditions, the DSS decided to re-arrest him at the gate of Kuje prisons on the ground that investigations have not been concluded in respect of other criminal allegations.' – Punch.