Nigeria And The Debate On Rule Of Law 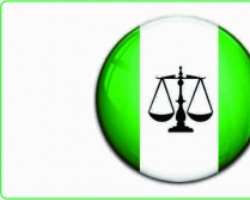 A prominent question which touches on the fundamentals of our democracy was asked on the incessant violations of extant and binding orders made lawfully by competent courts of law by the operatives and officers of the DEPARTMENT OF STATE SECURITY (DSS) also known as STATE SECURITY SERVICES but the response of Mr. president left a sour taste in the mouths of most rational and right thinking Nigerians.

Two prominent legal cases including those of the erstwhile National Security Adviser RETIRED COLONEL SAMBO DASUKI and that of a civil rights activist and the Director of the Europe based Radio Biafra MR. NNAMDI KANU were used as a case study whereby the government’s security officials have repeatedly and vexatiously violated lawful court orders to grant the duo bail.

To cap it up, section 6(1) of the Nigerian Constitution unambiguously provides thus: _“The judicial powers of the federation shall be vested in the courts to which this section relates, being courts established for the federation. _

For the purposes of clarity, Section 6(5) of the constitution states that the section aforementioned related to;_(a) the supreme court of Nigeria; __(b) the court of appeal;__(c) the federal High court;__(d) the High court of the federat capital territory, Abuja, amongst a few other COURTS OF LAW._

Our revered fathers of Philosophy especially political philosophy such as Plato, Socrates, Aristotle and even philosophers of the medieval period such as Thomas Aquinas of continental Europe and Augustine of Hippo now Algeria in North Africa stated that the polity can’t be administered transparently and the leaders can’t be held to account if the basic principles of good governance such as respect for the rule of law are violated with reckless abandon.

These great thinkers reasoned that this idea of the polis (polity or nation- state) as a natural phenomenon rather than a man-made one underpins Aristotle's idea about ethics and the politics of the city-state.

Within the community of a polis, the citizens develop an organization that ensures the security, economic stability, and justice of the state; not by imposing any form of social contract, but because it is in their nature to do so. President Muhammadu Buhari who swore by the Nigerian Constitution does not need professors of law to tell him that his avowed refusal to respect the rule of law will backfire because it is inherently unconstitutional and illegal and since a foundation built on illegality will collapse like a pack of cards similarly a government that publicly disrespects orders of court will lose the popular and constitutional legitimacy and opens its self to impeachment by the National legislature if the members of parliament are patriotic and lawvabiding.

It follows therefore that the decision of the current government to detain Colonel Sambo Dasuki and Nnamdi Kanu even against the unambiguous orders of competent courts amounts to the President adopting anarchy and lawlessness as his methodology of running Nigeria which is absolutely unconstitutional and reprehensible and therefore must be discontinued to save Nigeria’s democracy from collapsing. Any democratically elected administration that disrespect the constitution is committing high treason and if a government loses legitimacy it is nothing but a gang of opportunists tickets anarchists. Politics is too serious to be left to the politicians so it behoves on the Nigerian Bar Association and organised civil society and the hierarchy of the nation’s court system to protest the current rape of constitutionalism by the Muhammadu Buhari's Government.