Lol! Davido Chickens Out Of Fight With Cynthia Morgan 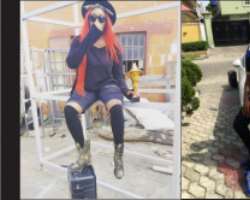 SAN FRANCISCO, January 04, (THEWILL) – Hmmm… we're definitely off to an interesting year! First it was Don Jazzy and Olamide. This time it's Cynthia Morgan and Davido. The dancehall queen came for Davido in a video shared on Youtube, calling the superstar a f**kboy following her win at The Headies!

“If there’s one thing I don’t like, it’s a f**kboy and me know a couple of f**kboys in this industry. And the award for the best Reggae/dancehall category is Cynthia Morgan…how do you feel now? F**k boy! Balu. Trust me, I like a couple of your music but I don’t f**king like you, fam. I don’t f**k with you so don’t f**k with me. I don’t play like that. If you’re wondering who I’m talking about, I’m talking about Davido. If you got a problem with that, f**k all you niggas”

See the video below!
Davido however wasn't going to join issues with her as he responded with an uncharacteristic calm tweet. What he said below!