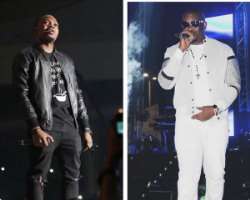 BEVERLY HILLS, January 04, (THEWILL) – The 2015 Headies awards would no doubt go down as a memorable one in the Nigerian entertainment industry following the antics of two of the most respected players in the field – Don Jazzy and Olamide.

It is widely known that the 'Next Rated' category of the Headies is one that is highly covetedbecause of the recognition that comes with it (and the Hyundai car too!).

Shockingly, as against popular expectations that YBNL act, Lil Kesh would take home the plaque, Mavin Records artiste, Reekado Banks was announced winner. The hall was in an uproar as fans voiced their protest. Everyone settled down again till YBNL lover boy, Adekunle Gold was announced winner of the 'Best Alternative Song' category.

Things got a bit heated when the whole YBNL crew escorted Adekunle Gold onstage to receive his award, then CEO Olamide took the mike and started an epic rant.

He dedicated the award to Lil Keshbefore going off on the award organizers saying how all of Lil Kesh's songs were back-to-back hits and that he deserved to win the Next Rated category. He then threw an open diss when he said “Koni da fun iyalaya anybody” (a Yoruba expletive referring to one's matricidal lineage). Olamide then dropped the mike and his cup (believed to contain alcohol) before storming offstage.

Watch the clip below!
As expected the whole hall went gaga as many screamed their support. This isn't the first time Olamide would pull this kind of stunt. He did the same during the 2014 Headies when LilKesh lost out on the 'Rookie of the Year' category.

However, the drama didn't end there.  Mavin Record boss, Don Jazzy was honored with a 'Special Recognition Award' and as he gave his thank you address, he finished of with the statement: “EgbonOlamide, if you want the car, come and collect it. God bless you”.

Watch the clip below!
This led to another uproar during which Don Jazzy and the rest of the Mavin crew stormed out of the venue.

As many were reeling from what has been termed “beef of the year”, Olamide took to Twitter to rant some more when he heard that Don Jazzy mentioned his name.

He wrote: ( Warning!! Use of strong language ) Over the weekend, Olamide's tweets and the feud became the trending topic on social media with many expecting a comeback from Don Jazzy who unsurprisingly remained silent.

Some celebrities also aired their opinion on the whole fiasco while others like MI refused to be dragged into the whole brouhaha.

Yesterday, Olamide again shared a post on social media where he apologized for his antics at the Headies which included swearing on live TV.

We have it on good authority that top personalities waded into the matter as and settled the differences between the two parties, which led to a public reconciliation with Olamide, and Don Jazzy sharing similar posts on Instagram.

They both shared a picture of themselves shaking hands with the caption:

“We are very sorry for the wahala. Make una no vex ooo. It is our responsibility to lead but then again we re only human and we all make mistakes. #WeAreSorryHeadies #WeAreSorryFans #PeaceAndUnity #YBNL #SMD #OneLagos #OneNigeria”

We have to wonder, where was their meeting point? Mainland or Island?

Anyway, while the beef was ongoing, OnoBellotook a poll on social media where fans were asked to take sides. (Click here to view) Many sided with Olamide.