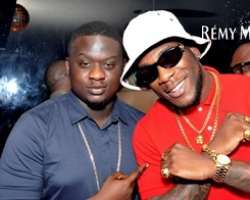 The Nigerian social media platform is getting more interesting as the day goes by as some celebrities use it as a medium of attacking each other and at the same time settling issues.

Aside just having the negative side of this various social media platforms, some still use it in passing positive messages across at the same time having interviews.

Recently, the social media has been used by YBNL rapper, Olamide, to diss on Mavin Records boss, Don Jazzy, and many have used the opportunity to create jokes out of the situation.

Former Mo'hit singer, Wande Coal, has chosen to remain silent on the trending beef going on where he has come out to laugh at the issue and said, “laughs, just passing through.”

Fellow singer, Burna Boy, who has always not been a fan to awards but hard work, also mocked the situation playing out by saying, “laughing my ass out, just dey observe o.”