Buhari Has Not Banned Hijab – Presidency 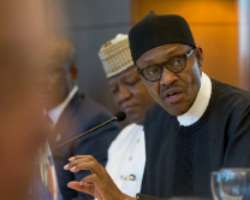 BEVERLY HILLS, January 01, (THEWILL) – The Presidency on Friday debunked insinuations and rumors that the administration of President Muhammadu Buhari has banned the use of Hijab, which it described as the Muslim women’s dressing symbol of modesty.

Speaking in response to interpretations that have been given to Buhari’s pronouncement during his maiden Media Chat regarding the regalia, Senior Special Assistant to the President on Media and Publicity, Malam Garba Shehu, described such speculations as unfounded.

He stressed that the Buhari administration would always respect the rights of Muslims to protect their modesty and allow religious freedom as it affects everyone.

Shehu observed that the Hijab is being abused by terrorists to carry out suicide attacks on innocent people, which violates the teachings of Islam, but assured that the President will not take any decision on the issue without due consultation with all the stakeholders.

“Everything will be done to balance national security requirements with the rights and obligations of citizens under their religions as protected by the constitution,” the statement said.

While noting that the increasing abuse of the Hijab by terrorists to perpetrate criminal mass murder and other atrocities is a reality, he asserted that the government would address the security challenge in consultations with Muslim leaders so as to find a workable solution.