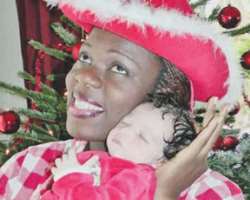 After she made headlines a few years ago, following her nude pictures which were published by a soft-sell magazine, actress Anita Hogan, who was recently delivered of a baby boy named Munachi, seems to be staging a dramatic come-back again.

Hogan, who remained undaunted while the scandal lasted, took a break from acting to nurse the wound in her heart and even re-organize herself.

Interestingly, her Dutch husband, in spite of the scandal, stood by her throughout the stormy period.

Since the birth of her child, she's has been most grateful to God for His mercy in her life, despite the odds. But it is not clear at the moment when precisely the Akwa-Ibom state-born actress will likely embrace her first love, acting, again.