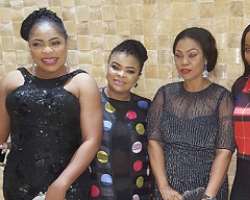 The life of a celebrity is just that they just have to be careful about as whatever they do is no longer private because directly or indirectly, people are watching.

Recently, some Yoruba actresses, Laide Bakare, Fathia Williams, Dayo Amusa, Kehinde Bankole, were at the celebration party held for daughter of King Wasiu Ayinde Marshal, Dami Marshal, who was recently called to the bar, but after their picture was shared, it became war with a boutique seller.

A boutique seller came pulling down actress, Fathia Williams by revealing that the cloth she wore to party is actually an inferior product worth N4,500.

The boutique owner who goes with the name bishetlisa_butik, has this to say, “Beautiful women but aunty fathia sabi fall my hand all day with her cheap clothes, this your up and down na N4500 for Lagos island ke, abeg upgrade o.”

But as far as the entertainment industry is concern, there are some die-hard fan who will always come to the rescue as they attacked the shop owner with war of words and various abuses on each other.