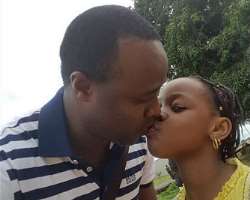 Filled with excitement to have such a beautiful, growing child, ?popular actor, Femi Adebayo, had an 'innocent kiss' with his daughter and uploaded the picture on Instagram.

Unfortunately, the veteran actor's intentions were misinterpreted and he got more than he bargained for from his fans who came at him with fangs bared.

They tried to nail him for daring to kiss his own daughter on the lips.

Some of them claimed that such an act was inappropriate, but others came to Femi's rescue, saying that there is nothing untoward about the picture.

Though Femi has deleted some of the offensive comments, his fans are still divided over the 'father-daughter-kiss'.