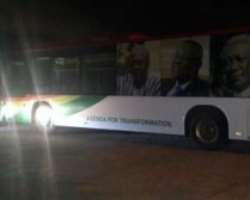 Ghana’s transport minister has resigned after reports that her ministry overspent 3.6 million cedis ($947,000) to paint more than 100 buses in national colours and with portraits of Ghana’s recent leaders.

The branding, by a private firm, involved respraying the imported passenger coaches and adding pictures of the country’s last four leaders, including current President John Mahama.

Opposition groups and anti-corruption bodies have raised concern over the money spent, which they said was far too much, forcing the presidency to set up an investigation.

“Dzifa Attivor, Minister of Transport wishes to inform the good people of Ghana that she has tendered in her resignation as Minister due to the current issues surrounding the branding of the 116 Ghana is preparing to hold presidential and parliamentary elections next year and, with the opposition accusing government ministers of inflating contract sums, inappropriate spending will likely be a top campaign issue.

There has been a public outcry since last week against the deal with some citizens filing a court action against the government, demanding full disclosure of the contract.

Attivor’s resignation is the first by a Ghanaian minister in more than a decade and comes amid efforts by the Mahama administration to cut spending as it implements a three-year aid program with the International Monetary Fund to restore fiscal stability.

Ghana, a major producer of cocoa, gold and oil, is currently grappling with high budget deficits, widening public debt and a three-year-long electricity crisis which has stunted industrial growth and made the government unpopular ahead of the 2016 vote.