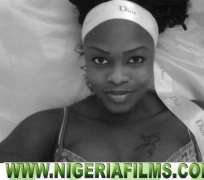 The drama between Jim Iyke and his former babe, Tutupie Sherrif, is still unfolding as Jim Iyke has vowed to take legal action if his ex should say anything damaging to his person in newspapers again.

Speaking through a sttaement released by his publicist, Big Sam Media, Jim said he will not hesitate to defend his fundamental human rights in the court of law and make her and her conspirators face the music.

“We repeat for the umpteenth time that Jim never beat her, he did not grant any interview and he never diverted funds meant for any charity home to private use. We see her action as the work of desperate woman who want to blackmail or coerce our client to continue the relationship they used to have,”the statement read.

In a phone interview once granted to nollywoodgists.com recently, Tutupie took back one of the allegations she levelled against the actor saying she was misled into telling the public that Jim was a fraud.

But earlier in the week, the same voice of a female who nollywoodgists.com spoke to, called the reporter and denied ever speaking to the press or taking back any allegation.

“I just got your number from somebody and the person told me you wrote that I granted you an interview withdrawing an allegation against Jim. I was not the one that you spoke to. I have been in France for the past two months taking care of my sick father. Please can you send the number you called. I need to get to the bottom of this. It's like somebody is impersonating me. I am not withdrawing any allegation.”

The reporter sent the number she called to the 'new' Tutupie and she said she was going to call the number immediately and ask the owner of the line why she was impersonating her.

Ironically, few minutes later, 'new' Tutupie called back with the same number nollywoodgists.com used during the phone interview and said, “You just gave me my MTN line. This phone has been switched off for the past two months and I didn't not give it to anybody. I wonder who you said you spoke to because it was not me and it was not this number you called.”

nollywoodgists.com reminded Tutupie of the text messages she sent nollywoodgists.com when the report was published, which read, “Hey, how are you? What is the headline of your story? Would have called but I am roaming. Just got into Ghana. I hope you journalist didn't trash talk me. Tutupie.” And still via test message, nollywoodgists.com replied the text asking the identity of the sender since the number was not saved on her phone.

But even as the reporter read out the text messages, the 'new' Tutupie insistedthat her phone had been switched off for two months, that she was in France and had never been to Ghana nor granted any interview to anybody. She said no text was sent via her phone and she never gave her phone to anybody.

Aware that she had been caught in her own lies, she said, “I think somebody 'hacked' my phone. I am so sorry. I will trash it out with the person.”

nollywoodgists.com eventually gathered from a reliable source that Tutupie came up with this new plan because Jim told her he would only take her back into if she should take back the allegations, at the end of the day, the actor didn't accept her back again even after she withdrew the allegations.

According to the source, “The babe is so desperate. How can she say she was in France? She asked me for Jim's number and I told her I would give it to her. But since I didn't get any permission from Jim to give out his number, I later decided not to give it to her. Jim told her he was only going to take her back if she goes to the paper to take back the allegations. She has done that and it seems Jim is still not interested in her as such, she is launching this onslaught.”