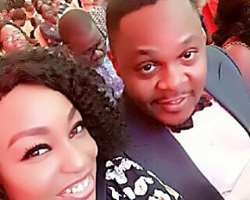 It seems popular actor, Femi Jacobs, is gradually opening up on his rumoured affair with top Nollywood actress, Rita Dominic.

Few months ago, it was reported that the two celebrities were deeply in love but chose to keep their romance away from the public eyes.

The two rumoured lovebirds were the lead casts in Rita's 'The Meeting' movie.

“They are dating for real but still keeping it under wraps…they started as friends after 'The Meeting' movie and it became serious afterwards” a source had claimed.

However, the two parties have neither confirmed the reports nor refuted it, but just a while ago, Jacobs took to his Instagram page to share a photo he took with Rita Dominic some days back at an event.

He captioned it, “With day 1 bae a few days ago. Flawlessly beautiful Rita Dominic, I'll always remember to smile. Amen.”

Is he giving us clues to the love affair? This is one of the questions some people have started asking as regards Jacobs' post.