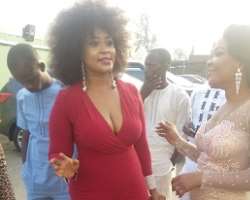 Top Yoruba actress, Biodun Okeowo aka Omo Butty, is really living large and she owes no one an apology for that.

In fact, those who are very close to her say she deserves more than what she has now because she has worked hard and paid her dues in the movie industry in Nigeria.

The actress, who aside acting also owns a store in Lagos, recently got herself an Acura MDX SUV worth millions of Naira.

Since acquiring her new 'toy', the actress has been seen painting the town red with it. n fact, over the weekend, she cruised the wonders-on-wheels to an event on Sunday in Lagos.

Nollywoodgists.com spotted Biodun with about four guys with her at the function alighted from the vehicle.