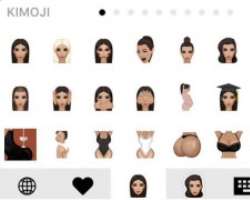 SAN FRANCISCO, December 22, (THEWILL) – The Kardashians are at it again! The queen of the Klan, Kim Kardashian launched her emoji app called Kimoji today and like everything the Kardashians touch; it broke the internet…or at least a part of it.

Apparently, there was a massive download of the new app by fans resulting in a crash of Apple's app store.

Kim took to Twitter to apologize for the inconveniences, and maybe gloat a little. Lol. What she tweeted below!