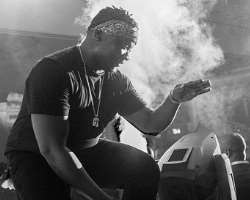 Popular Nigerian singer, Wande Coal, is known for churning out good tunes, which keep many legs dancing on the floor at functions.

Apart from his danceable tunes, the singer catches the fancies of ladies with his glowing chocolate skin colour.

Wande Coal has always been known with the low cut hairstyle, but this time, he has decided to give dreadlocks a chance.

The singer, who recently launched his album, unveiled his new looks after he had left his hair grown for a while.

He was spotted performing on stage with the new dreads, tying his head with a bandana.