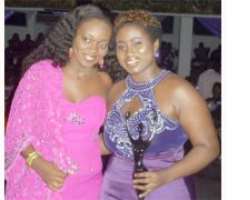 The bubbly actress, who is seen as Ghana's Jenifer Hudson, put up some startling dramatic performance on stage after she was named the Best Actress of the Year, alongside her colleague actresses Jackie Appiah and Naa Ashorkor Doku-Mensah, for their trio roles in Sparrow Production's 'Perfect Picture'.

Lydia could not hold back her tears, as she broke down when Nollywood actress, Dakore, handed her the AMAA statuette and the microphone to speak.

Lydia and her colleagues were in competition with top and known faces, Akofa Edjeani Asiedu (I Sing Of A Well), Stephanie Okereke (Nnenda), Flora Suya (Season Of A Life) and Bimbo Akintola (Freedom In Chains).

It appeared she least expected to carry the day, going by the tough competitors for that category. Even while walking onto the stage, Lydia glaringly looked dazed.

NEWS-ONE observed that as she walked towards the dais, she looked over her shoulder, ostensibly to check if Jackie was following her, and then to the crowd who were then cheering her.

Finally when she got on-stage, and was handed the statuette and microphone, the Ghanaian actress, apparently lost for words, could not hold back her tears, to the extent that the few seconds' speech she managed to put together was overshadowed by stammering. Jackie tried consoling her but she also almost joined Lydia in the weeping galore.

Lydia later told NEWS-ONE in an exclusive interview that the emotions she expressed on stage were not only about the award but also about all the hard times she went through before getting to her current status. Interestingly, she had a lot of words for the media when she was off-stage.

“It has been a long journey and there are some days when you want to give up because you wonder if you are doing something right. All what happened on-stage was a cloud of emotion.
“In the history of the Oscars, it happens all the time and people shed tears on stage. I was carried away. It was a shock, a real big shock.”

Sounding modest, Lydia says, “I did not see the awards coming to me, looking at the people we were competing with. And that explains my emotions on stage. In that category, we had some of the biggest names in Africa. I respect Bimbo Akintola, I watch some of her movies.

I love Stephanie. Akorfa is on another level, as well as Naa Ashorkor and Jackie. Everybody is good, and so for you to be called among them, it is more overwhelming.”

Lydia was not the only surprise as Ghana really caused a stir by annexing most of the important awards. In all, the Ghallywood actors picked 10 awards out of the 31 nominations they had.

Akorfa's controversial “I Sing of A Well” picked three Awards. Two of the awards included AMAA Achievements in Sound and Costume. The other was an Honoree award, which was AMAA Special Juror's Award.

Shirley Frimpong Manso's 'A sting in a Tale' also won the Best Original Sound Track as well as the AMAA Best Director with her movie, 'Perfect Picture'.

Adjetey Annang, popularly known as Pusher, snatched Best Performance by an Actor in a Supporting Role for his exceptional role in 'Perfect Picture'.

Prolific producer, writer, director and actor, King Ampah, was presented with a life-time achievement award for his contribution to African cinema over the years.

Nigeria led the continent again with 12 awards out of the over 40 nominations. The country's most talked-about movie, 'Figurine' gathered 5 awards out of 10 nominations. It included Heart of Africa Award for Best Film from Nigeria, AMAA Achievement in Cinematography, Best Picture, Achievement In Visual Effect as well as Ramsey Noah's role in the movie, wining Best Performance By An Actor In A Leading Role.

Nollywood also went away with Best Documentary and AMAA Achievement In Editing awards with the movies 'Bariga Boys' and 'The Child'.

'The Child' went on to take AMAA Achievement In Make-Up award with 'Fulani' going for the AMAA Achievement in Art Direction award. Best Screenplay went to 'The Tenant' with the most Promising Actress going to Chelsea Eze also from Nigeria for her role in 'Silent Scandal'. Lastly, Nigeria's 'Soul Diaspora', shot in the USA, won the Best Film by an African Filmmaker in the Diaspora award.
Kenya and Uganda came next with two awards each. Obama's native country, with a movie titled 'Togetherness Supreme' picked the Best Performances by a Child Actor and its character, Wilson Maina, won the Promising Actor of the Year.

Uganda's 'Imani' took the Best Film in African Language and Promising Actress went to Rahema Nanfuka who jointly won the award with Nigeria's Chelsea Eze in 'Silent Scandal'. South Africa had one award as the 'Abbys Boys' was adjudged the Best Short Film.

Egypt and Malawi also had one each: 'Hanayns Shoe' (Egypt) won Best Animation and Tapiwa Gwaza from Malawi got Best Supporting Actress with her role in 'Seasons of a Life'.

The Awards was not without discrepancies though. There were technical setbacks with sound quality being one of the major concerns that arose.

Even more appalling was the fact that different footages were shown for Ghanaian nominees. For instance, Martha Ankomah, who was nominated for Promising Actress of the Year, did not even have her face shown on the footage, as she was replaced with Juliet Ashanti who played Nadia's kid sister in the 'Sin of the Soul' movie.

Peace Anyiam Asigwe, CEO of AMAA, in an interview with NEWS-ONE, admitted that this year's event turned out to be a little below expectation as compared to previous events.

She however apologized for the logistical and technical hitches.