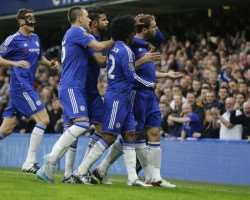 The atmosphere at Chelsea was toxic as another post-Jose Mourinho era began — even though the champions sauntered to a victory over Sunderland.

The fired manager’s name was chanted throughout while some Chelsea players were jeered and branded “rats” in banners displayed by their own supporters at Stamford Bridge on Saturday.

For some fans, beating Sunderland 3-1 with a performance so slick at times in the first half, only seemed to add weight to Mourinho’s assertion before being fired on Thursday that the players had “betrayed” him during this derisory attempt to defend the English Premier League trophy.

Captain John Terry used his program notes to deny that “player power” forced Mourinho out but, after a three-game league winless run ended, he accepted that winning back the fans was a challenge.

“Absolutely and rightly so as well,” Terry said, with Chelsea only four points above the relegation zone.

“They will support us through the difficult period and when we come out on top sooner or later. If we keep on putting performances like that the fans will be happy.” Chelsea’s Loic Remy, left, competes for the ball with Sunderland’s Billy Jones during the En …

The responsibility from next Saturday’s match against Watford, until the end of the season, again rests with Guus Hiddink. Although the 69-year-old Dutchman was appointed on Saturday to repeat the firefighting role he first carried out at Chelsea in 2009, when he won the FA Cup, coach Steve Holland assumed temporary control against Sunderland.

Chelsea lost nine of 16 games in its title defense before the west London club decided that the “palpable discord” between Mourinho and his players compelled them to dismiss the manager for a second time, eight years after his first hasty exit.

The discord on Saturday, though, was clearly between the team and its fans — even as the goals flowed from Branislav Ivanovic, Pedro Rodriguez, and Oscar against a Sunderland side marooned in the relegation zone.

The divisive tone for the day was set by Diego Costa and Cesc Fabregas being booed as the starting lineup was read out before the match. A fan banner also accused the Spanish pair and Eden Hazard of being “the 3 rats”.

“You let Jose down,” read another banner, targeted at the whole squad. “You let us down.” The quandary for the squad had been highlighted within minutes of Mourinho’s firing by Sunderland manager Sam Allardyce, who said it would be a “pretty bad indictment on the players if they actually go and perform a lot, lot better.”

Sunderland, though, meekly provided Chelsea with the platform to demonstrate the talents undoubtedly still in the squad.

An early rendition of Mourinho’s name was booming around the stadium as Ivanovic scored his first goal of the season after five minutes, meeting Pedro’s corner and planting a header into the net.

“Where were you when you were (expletive)?” Chelsea fans immediately chanted.

They were peculiarly further riled eight minutes later by Pedro giving Chelsea a two-goal cushion by exploiting Sunderland’s inability to clear Ivanovic’s cross. And after Sunderland goalkeeper Costel Pantilimon brought down Willian, Oscar netted the third goal five minutes into the second half. After Fabio Borini pulled one back for Sunderland, Chelsea survived scares before registering its biggest league win since defeating Arsenal 2-0 three months ago.

“There was a lot of pressure on us before the game but we brought it on ourselves,” Terry said. “Some of the football was excellent, one and two touch … it dropped off slightly in the second half but we were delighted.”

Now Hiddink’s second Chelsea reign begins. Much like Chelsea, Hiddink has a reputation to restore after being in charge of failed tournament qualification campaigns with Russia, Turkey, and the Netherlands in the last six years.

Hiddink watched the Sunderland victory and took in the poisonous atmosphere from high in the stands with owner Roman Abramovich and former striker Didier Drogba, who Chelsea has not ruled out returning in a coaching capacity.

“Chelsea is one of the biggest clubs in the world but is not where it should be at the moment,” Hiddink said. “However, I am sure we can all turn this season around.”

But with Chelsea sitting in 15th place, qualifying for the Champions League without winning the competition looks unlikely with Tottenham 11 points ahead in fourth.