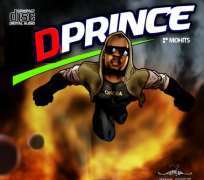 Many underestimated D'Prince before he released his slew of 3 hit singles. Questions like “Is he a singer or a rapper?”, Comments like “He's just on Mo'Hits because he is Don Jazzy's brother”, well, the positive fan reception to his songs have silenced some of his critics. He has been nominated for a 2010 Hip Hop World Award and now, D'Prince's debut video for his single “Omoba” has just been released. The video is directed by Gbenga Salu.

Check on it below