“Terry G is MAD!” Soundcity Blast shouts it out on the cover of their new issue 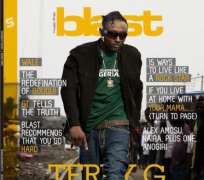 Terry G was one of the breakout music stars of 2009. From his publicized feud with AY.com on whose track “Pass Me Your Love” he featured, to his song “Ginjah Ur Swaggah” which created major buzz and a new slang. This year has been all about Terry G's “Madness”, with “Free Madness Part 1” & “Free Madness Part 2” creating big waves.

The controversial musician appears on the cover of this month's edition of Soundcity Blast, the popular music magazine is known for its boundary pushing covers including the popular “Banky W between the sheets” edition and “2Face's Innocent/Guilty” cover.

The cover sees Terry looking “mad” and disheveled walking along a grimy train track. Very creative cover, hope the interview and content matches up! Check on it.