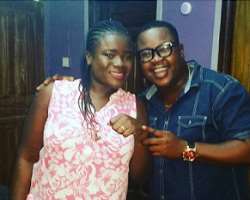 Popular Yoruba comic actor, Babatunde Bernard better known as Baba Tee, has taken a step to give marriage another trial.

The actor proposed marriage to his girlfriend, Omosunlade Odulate, who is from Sagamu, Ogun State.

The charming lady accepted her boyfriend's proposal, giving him her finger to insert the engagement ring to indicate that she is already taken.

Baba Tee had it rough with his former UK-based wife, Yetunde Oduwole better known as Yetunde Busteline during the period their union lasted.