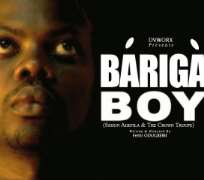 CLICK HERE FOR THE DETAILS OF ALL THE NOMINEES AND WINNERS OF THE 2010 AMAA.

Femi Odugbemi's short documentary film chronicles the picturesque life of a young Nigerian actor and choreographer Segun Adefila and his dance drama troupe as he overcomes the challenges of struggling for survival in the Lagos ghetto of Bariga. The spirit of his art propels his genius to rise above the poverty surrounding him and his Crown Troupe of Africa.

The poverty and deprivation of ghetto life is no barrier, rather it is the source of inspiration for the dynamic and politically-charged dance drama of Segun Adefila and the Crown Troupe.
From the inner city slums of Bariga in Lagos, Adefila and an unlikely band of street performers create a guerilla theatre of inspiring music and dance drama with themes that parody the sensitive contradictions of the politics and government of Nigeria.

The documentary chronicles the artistic development of Segun Adefila and his Crown troupe's emergence as the most sought-after dance drama theatre in Nigeria, appreciated for their thought-provoking approach to their art as a mirror of their environment and a tool for social change. Featuring landmark music and dance performances and incisive commentaries from leading Nigeria culture personalities such as Ahmed Yerima, Francesca Emmanuel, Duro Oni, Tunde Kelani and Jahman Anikulapo,
“Bariga Boy” is a gripping experience of how one artiste's creative consciousness is fired by the urban ghetto experience. Story by By Femi Odugbemi