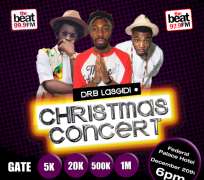 They will be joined by the biggest acts on the Nigerian music scene such as Tuface, Olamide, Adekunle Gold, Falz the Bahd Guy, Davido, Olu Maintain, Phyno, and Vector. Completing the lineup for the night of world class entertainment are Wande Coal, Yemi Alade, Harrysong, Lil’ Kesh and Kcee.

“Apart from the fact that there is a large Nigerian population in the UK, a lot of Nigerians are also actively involved in the UK urban music scene and UK urban music is becoming increasingly more popular here. Earlier this year, Skepta remixed a popular song by Wizkid along with Drake and made the song a global phenomenon, and this is just the latest in a long history of cultural exchange between both countries.

Some people may not know this, but Skepta’s family is from Nigeria and his name is Joseph Adenuga, so this concert will be particularly meaningful to him. I know there is a large number of people here in Lagos who are big fans of Skepta, Stormzy, Krept & Konan and Grime music in general. Skepta will certainly enjoy the opportunity to visit his home country and interact with Nigerian Grime music fans. I am looking forward to the 20th of this month.”

In a statement released by event organisers Megalectrics Limited, operators of The Beat 99.9 FM and The Beat 97.9 FM Ibadan, it was disclosed that tickets for the show are pegged at N5,000 for regular tickets and N20,000 for VIP, while tables will go for N500,000 and N1m. The statement further revealed that tickets are available at Beat FM studios situated at 26, Keffi Street, Ikoyi Lagos and online at www.ariiyatickets.com . Table bookings can also be made by calling 08033085331.

You can join the conversation online using the hastag #BeatFMChristmasConcert.

To find out more about the Beat FM Christmas concert, click here