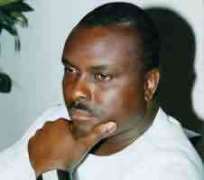 Elder statesman and one- time Information Minister, Chief Edwin Clarke, on Monday took on the embattled former governor of Delta State, Chief James Ibori, as he called on him to come out of hiding and surrender himself to the Economic and Financial Crimes Commission [EFCC].

He told Ibori who is wanted for questioning over an alleged N44 billion fraud to stop threatening his life.

The Ijaw leader disclosed that he had decided to battle the former governor because he imposed his cousin, Chief Emmanuel Uduaghan, as governor of the state to cover up his shoddy deals while in office.

At a press briefing in Abuja Monday, Clark disclosed that he had been receiving threat messages since the manhunt for Ibori by the EFCC began.

Justifying the manhunt by the anti-graft agency, Clark called on Nigerians not to see Ibori's trial as a political witch-hunt as the allegations against him were true.

According him, 'I received series of telephone calls this morning from Sapele and Warri, warning me to suspend my travelling from Abuja to Warri via Benin City because of threat from Oghara people to harm me and members of the Delta State Elders Forum because of our petition to the EFCC to investigate Ibori on the unathorized and illegal sales of 52 million of Delta State government shares in Oceanic bank Plc to service the N44billion loan obtained by Chief Ibori's company, Ascot Offshore Nigeria Limited, which bought Wilbros, an American company, in Port-Harcourt.

The former governor was also accused of selling 800 million shares in Oceanic Bank Plc to secure a N44billion loan from Intercontinental Bank and the outright sale of 500million of the shares to service the loan.

'This morning, the Oghara people blocked the express road on both sides between Oghara and Koko junction chanting war songs and carrying placards, protesting against the Delta Elders Forum.'

'Ibori s belief that killing me will silence the voice of opposition in the state and establish firmly his illusionary political empire. He also believes my death will weaken his on-going trial of corruption by the EFCC through constant adjournment and unwillingness of the state to prosecute the criminal charges against him.

'I also wish to draw the attention of the general public that apart from the plot to harm me and members of the Elders Council of Delta State, there has been constant plan to blackmail me by the Delta State Government headed by Dr. Emmanuel Eweta Uduaghan that I have been boasting with the name of the Acting President in order to ja