RUMBLE IN THE HOUSE OVER PLOT TO REMOVE BANKOLE 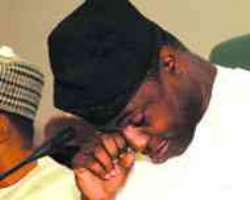 Palpable tension has gripped the House of Representatives, over plot to remove the Speaker, Dimeji Bankole. Bankole is among some notable Nigerians including no fewer than five governors who are currently stranded in Europe due to the volcanic ash, which led to cancellation of flights.

As members of the Nigeria First Forum (NFF) who are pushing for Bankole's removal confirmed the plot and the scheduling of a meeting for last night to fine-tune their strategies, there is uncertainty over whether the House, which had been on Easter vacation would sit today.

It was gathered that the plenary session had been postponed till next week to enable engineers working on the electronic voting machine to conclude work to enable members to cast their votes on the clauses for review in the 1999 Constitution. But Chairman of Rules and Business Committee of the House, Hon. Solomon Ita Enang assured that the House would resume business today, adding that the voting on the constitution review had been delayed till Thursday. He didn't give reason for the postponement.

The move to unseat Bankole, it was further learnt, was not unconnected with the belief that he would work against the bid to remove ailing President Umaru Musa Yar'Adua to ensure Dr Goodluck Jonathan emerge as substantive president.

The NFF is believed to be working with loyalists of Acting President Jonathan in the impeachment plot.

Investigation, however, indicated that the acting president was not keen on the execution of the plot because of its implications for separation of powers, good governance and pursuit of the 2011 political agenda.

According to sources, Bankole's trouble is largely from his home base, Ogun State, where the former President Olusegun Obasanjo who had never supported his candidature as Speaker, would spare no effort to unseat him.

A source close to the NFF said House of Representatives members, including Gbenga Oduwaye, Kayode Amusan and former speaker Patricia Etteh were in Ota, Ogun State last Saturday along with some members of the group over the move to impeach Bankole.

The governor who has not hidden his hostility toward Bankole was also alleged to have deployed footsoldiers in the battle to unseat the Speaker who is representing Abeokuta South Federal Constituency in the House.

The group, according to sources, was billed to meet at Valencia Hotel, Abuja last night on the impeachment, with Amusan assigned to reach out and win over members from the North who are Bankole loyalists.

Although the lawmakers from Ogun State said to be the arrowheads of the impeachment could not be reached for comments last night, a member of the NFF, Hon. Eziuche Ubani confirmed that the group had been meeting since the ailment of President Yar'Adua, to review the position of the House on national issues.

Ubani admitted that most members of the Forum were scandalized about the way the House was being run and that it was the efforts of the group which led to the position taken by the House on the acting president.

'We have been meeting since this Yar'Adua matter. Our meeting is open, yes, we are meeting today as usual, NFF has been meeting and the minutes of our meeting are for anybody to see. NFF is about putting the interest of Nigerians first and this was responsible for our motion on the acting president.

'Our focus is very clear, yes we were embarrassed that the House is losing its weight. We were not happy the way the House is being run, we decided to come together and if not because of the NFF, we would have passed a motion different from what Nigerians wanted on the acting president issue,' he stated.

Ubani said the leadership of the House under Bankole was taking positions, which were at variance with the expectations of Nigerians, which he said informed the coming together of the group to salvage the image of the House.

According to him, the group was ready to remove any clog in the wheel of progress of the House, adding that the NFF would always push for the stability of the House.

'We need to put sentiments apart on issues of national interest. Our focus is very clear, to put Nigeria first on issues like the electoral matters, constitution review and restoring the integrity of the House,' he said.

Ubani, who heads the Climate Change committee regretted that the House under the present leadership lost goodwill of the people when it launched a probe into the power sector, but lost the probe to ineptitude.

As the spokesman of the Constitution Review Committee, he said the House would resume the consideration of the recommendations of the ad-hoc committee chaired by the Deputy Speaker, Bayero Nafada.

He confirmed that voting had been delayed until Thursday when the voting machine was expected to come on stream.

But as the plot to remove the speaker thickens, the embattled speaker, who is stranded in Europe has begun moves to appeal to aggrieved members to sheathe their swords in the interest of the nation and the task ahead of the House.

Some members confirmed the receipt of text messages from the speaker indicating a dedicated GSM number on which he could be reached and begged forgiveness for any wrongdoings.

'Yes, I received such a message, the speaker sent to me, the GSM number that I can use to reach him anytime and I don't see anything strange in that because you can change your number at anytime,' a member said.

Another member of NFF confirmed that though the speaker did not send his new number to him, but that some of his colleagues who received such message informed him that the speaker had been pleading for forgiveness.

This is what a colleague sent to me from the speaker, 'This is my new number in which you could reach me, colleagues I am appealing to you to forgive me if I have done anything wrong.'

But one Bankole's loyalists in the House, Hon. Chinyere Igwe (PDP) Rivers State described the plot to remove the speaker as wishful thinking, which will never come to pass.

'It is all rumour, it is the figment of their imagination, we are waiting for them. We will all meet on the floor of the House when the House resumes plenary,' he said.

According to him, Bankole has not done anything wrong to warrant removing him.

'Nigerians are expecting much from the House. They want us to pass the Electoral Act. Nigerians want us to conclude the review of the constitution like the Senate had done, so why is it now that some people want to cause disaffection, we shall wait for them?' he said.