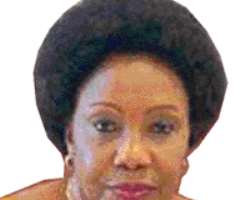 Joy Emordi
Precisely on April 12, 2003, Senator Joy Emordi emerged as the first woman of Igbo extraction in the South East of Nigeria to have been elected to represent Anambra North Senatorial zone. However, she was unable to assume her seat in the Senate owing to the declaration by the Independent National Electoral Commission (INEC) of another candidate, Senator Emma Anosike from her party (PDP) as winner of the election. The development led her to go to the Election Petition Tribunal which afterwards declared her as the duly elected candidate.

On assumption of duties as a senior legislator, Emordi was appointed Chairman of the Senate Committee on Education where she displayed charismatic personality and leadership qualities in piloting the affairs of the committee which was hitherto enmeshed in alleged bribe for budget scandal that led to the eventual resignation of the former President of the Senate, Adolphus Wabara.

Emordi put her background as an Educationist and a lawyer to effective use in the business of lawmaking and politics in the 5th National Assembly as she quickly deplored all necessary machinery in piloting the affairs of the Education Committee in addition to membership and active participation of other Committees of the Senate namely: Senate Services, Communications, Federal Capital Territory, Housing, Privatization, Sports and that of the Committee on Women Affairs & Youth Development.

Apart from her strong ever-present and budding profile which was manifested in the business of law-making, Emordi's contribution to debates on motion on matters of urgent national importance and bills, and recently her participation in the concluded review of the 1999 Constitution where she served in the Senate Committee on Constitution Review under the Chairmanship of the Deputy Senate President, Ike Ekweremadu stood her as a legislator that is very committed to her duties.

Following her records of performance in the 5th session of the Senate which ended in May, 2007, during which she succeeded in restoring confidence and respect to the Senate Committee on Education which was brought to its lowest ebb over the N54 million bribe for budget scam in 2005.

Emordi was re-appointed the Chairman of Senate Committee on Education as well as member of the Committees on Solid Minerals, Establishment and Public Service, and Petroleum Resources (Down Stream Sector) of the 6th National Assembly. No doubt her exposure to this heavy port-folio of responsibilities has enabled Emordi to advance far uphill on the learning and experience curve in domain politics. With a good grasp of legislative understanding, Emordi was able to sponsor many motions and bills that touched directly on the lives of the people thus justifying her many political experience drawn from appointments that provide the sources and resources of her diverse political experience, wit and sagacity.

Bills /Motions sponsored by Emordi
Emordi was well respected by majority of Senators for her robust contributions to debates on bills, motions and reports on the floor of the Senate. She had a style of adducing sound arguments and cogent points on the various issues that took place during her stay in the Senate and successfully sponsored the National Ethics Curriculum Bill 2008 which was the first private member Bill that was passed by the present Senate in addition to the Bill for an Act to make for the Establishment of National Institute for Educational Planning and Administration, (NIEPA) which has gone through second reading in the upper chamber of the National Assembly.

Emordi also sponsored a number of motions touching on various National issues that included Motion on the Need to Immortalize the late Renowned Mathematician, Prof. Chike Obi, Motion on the Epileptic electric power supply, Motion on the Immediate Construction of the Second Niger Bridge and co-sponsored the Motion on the Release of Mr. Ralph Uwazuruike, MASSOB Leader. Other motions she sponsored include one on the Rising Air tariffs and Decline In Flight Services by our Airlines and Police Extra Judicial Killing and the Rising Wave of Violent Crimes in Nigeria.

She also co-sponsored the Collapse of the Transport Sector in the face of Monumental waste of Public Funds, Oil and Gas Exploration in the Benue Trough, Chad Basin and Anambra Basin as well as the Deplorable State of Nigerian roads. There are still others on the wakeup call on FERMA, cancellation and Revocation of over 2000 Mining Licenses, Plight of Nigerians in Indonesian prisons, Checkmating Potential Toxic electronic waste Disguised as Second hand goods from developed Countries and the Non-implementation of the Principle of Federal Character in Government Establishments at Various levels in Nigeria.

At the constituency level, Emordi has done so much including the grant of Annual Micro credit to widows and youths in Anambra North Senatorial District through her pet project; 'Senator Joy Emordi Foundation For Micro Credit Scheme.

It was to the credit of Emordi in her capacity as Chairman of the Senate Committee on Education when under her leadership, the Senate in December 2008 successfully organized a National Summit on Education to proffer solution to the many problems bedeviling the Education sector just as she led the National Assembly delegation to the 181 session of UNESCO Executive Board in Paris France.

The Anambra born politician was dubbed the 'Joy of the Senate' by the Senate leadership owing to her motherly role in calming nerves when debates become so heated as she would be seen going round her colleagues pleading with them to see things from the nationalistic view and not allow their emotions take the better part of them.

The news of the Court of Appeal ruling voiding the election was first received by Emordi through a telephone text message after which she walked to the presiding dais of the Senate to brief the President of the Senate, David Mark who was visibly jolted over the sad news but had to quickly gather himself to ensure the completion of the voting for the passage of the constitution.

Even though Mark couldn't stand from his seat since he was presiding, the retired military officer turned politician found it difficult to believe until the humble Emordi went back to her seat, picked her bag and walked quietly out of the chamber to signify her exit from the Senate which took many of her colleagues aback. At that stage, Mark in utter disbelief shook his head possibly signifying a rejection of the court ruling that is still being considered as controversial going by the ruling of the same court in similar matter that earlier favoured Emordi.

Unfortunately, the development took place at a crucial time when the Senate was in the last stage of amending the provisions of the 1999 Constitution. Emodi played a major role in the review of the Constitution right from the Committee to the zonal hearings and later at the passage stage.