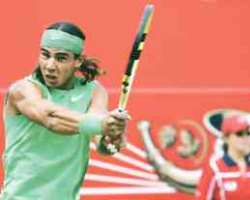 Spain's Rafael Nadal hitting a forehand's during the final of the Artois Championship at Queen's Club, London … on Sunday. Nadal defeated Novak Djokovic in two sets, 7-6, 7-5.

Top seed Novak Djokovic eased into the third round of the Monte Carlo Masters with a 6-2 6-3 win over France's Florent Serra on Wednesday.

The world number two, though, could have been more efficient in front of a capacity centre court crowd enjoying the event's first cloudless day at the Monte Carlo country club.

Serbian Djokovic will next face Stanislas Wawrinka, seeded 13th, for a place in the quarterfinals after the Swiss beat Latvia's Ernests Gulbis 6-1 6-4.

Djokovic got off to a flying start, mixing his game with cunning drop shots to open a 4-0 lead.

Serra pulled a break back in a 12-minute fifth game as he started to play more aggressively. Djokovic saw off another break point in the seventh game, following up on his serve to clinch the opening set.

A long forehand by Serra gave Djokovic the early break in the second set but the Frenchman did not capitulate and levelled for 2-2. Djokovic snatched the decisive break in the seventh game and wrapped up victory when his opponent sliced a backhand wide.