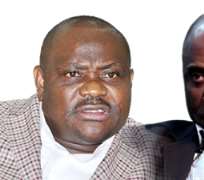 Following what came to light today at the Rivers State Governorship Election Petition Tribunal where all 7 Defence Witnesses of Governor Nyesom Wike complained bitterly of sight challenges and could not read their own statements, the All Progressives Congress, APC, has urged the Governorship Candidate of All Progressives Congress, APC, Dr. Dakuku Adol Peterside to establish a specialist eye hospital in the state to tackle the menace of visual challenges as soon as he is sworn in to office.

However, the APC believes that if all 7 witnesses from Tai [3], Khana[3] and Andoni[1] LGAs who testified were coached by Nyesom Wike’s legal team to feign blindness in order to escape re-affirming their statements and taking questions from Counsel to the Petitioner on cross examination thereby helping Wike to escape with the stolen mandate of the peoples, that strategy failed woefully.

The APC found it curious that witnesses some in their 30s all claiming to be serving or retired civil servants who deposed to statements suddenly became blind when asked to read their statements. Some claimed they could not read their personal data information on their PVCs. This was to enable them dodge cross examination by the Lead Counsel to Dr. Dakuku Peterside [Petitioner]. Eventually, the judge ruled that witnesses must read documents as may be requested by the Tribunal or Counsels.

The cross examinations by Chief Akin Olujimi [Counsel to Petitioner - Dr. Dakuku Peterside] exposed a lot of inconsistencies in the assertions and statements of the Defence Witnesses. For example, asked his age, one of the Defence Witnesses said he was 53 and has been voting from 1979. A simple calculation showed that he was not a witness of truth as he could not have been up to the voting age of 18 years by 1979.

The APC believes that no amount of theatricals and coaching by Wike’s lawyers will save the caretaker governor from being chased away from Government House, Port Harcourt by the time the Tribunal hands down its verdict.