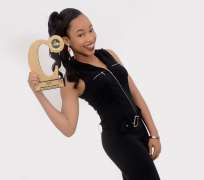 The just concluded Classic African Merit Award (CAMA) 2015 wouldn't have been complete without the appearance of the Little Princess of the Universe Daniella Okoye as she wins the 5th Edition of Classic African Merit Award as the Best Teen Actor of the Year 2015 alongside Rasikimo, Amanda Ebiye, Asandrea Collections, Dino Moleye, Deacon Iyke Kalu, Wofai Samuel, Imelda Jay, amongst others.

However, this new achievement is rooted back to her hard work as an upcoming actor in the Nollywood industry which earn her a lead role in a movie titled 'Elisa'.

According to Daniella, "winning a crown is not enough, I still need to put more effort into ensuring that I'm at the top of my game because I love entertainment and it doesn't distract my education".

In the nutshell she's hoping to star and appear in more movies and awards.

However, she has taken a giant step to join the league of top actors like Omotala Jolade, Genevieve Nnaji , Mercy Johnson and Monalisa Chinda (her role model).