Ruth Kadiri in Shades of Green at NEA Awards, Bag Actress of the Year. 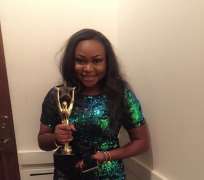 The year 2015 has indeed been a good year for Actress Ruth Kadri. Her most recent achievement is winning the Award, best Actress of the year with her movie, Matter Arising, at the Nigerian Entertainment Award (NEA). The award was held on the 6th September at the Skriball Center For The Performing Arts, New York, United State of America (USA).

Of a truth, Ruth Kadri, is one of the few actresses in Nigeria, who have carved out a niche for herself in the entertainment industry.

The actress who is known to be very stylish stepped out in green gown and was the cynosure of all eyes at the New York event, which was hosted by Ice Prince and Osas Ajibade.

Speaking on the award, Ruth says "Winnig this award made my year, particularly because people had to vote for the winners, seeing people use their money and time to vote for me made it special, I am grateful to those that voted, I am grateful to the organisers and I promise my well wishers out there that I will keep getting better".