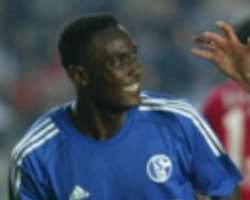 "At passport control, on December 27, he (Agali) was found to be in possession of a fake passport," said gendarmerie spokesman Robert van Kapel.

Upon further investigation, the 31-year-old striker in transit at Schiphol on a voyage from Lagos to Athens, turned out to have two sets of fake travel documents, said Van Kapel.

"In the one, the page with his personal particulars has been modified, in the other it was the visa," he said.

A judge will decide on Monday whether to extend the footballer's provisional detention for further investigation.

On Christmas Day, a 23-year-old Nigerian was arrested in the United States for the botched bombing of a Northwest Airlines plane bound for Detroit from Schiphol.