Queen Nwokoye, Ken Erics Others On The Set Of The Monk 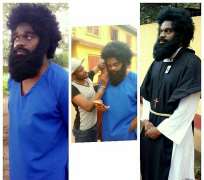 The shoot of the movie, The Monk may have come and gone, but what will continue to linger in the minds of Nollywood film lovers until its release are the leaked location photos.

Artistically made of costumes to complement the storyline and cast, the movie stars the likes of Nollywood actress, Queen Nwokoye, Ken Erics, Harry B Anyanwu, LizzygoldOnuwaje, SylvesterMadu alongside other acts.

Directed by Sylvester Madu, while produced by Jonas Izuegbu, The Monk is expected to be released into the market anytime soon, as the trailer will first hit.

In a related development, for his uncanny interpretation of roles and professionalism, award-winning Nollywood actor, Ken Erics got nominated for his role in Trials of Igho for Best Actor in the upcoming GIAMA Awards in New York.