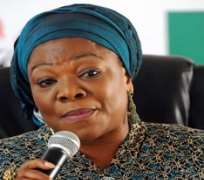 The Department of State Services (DSS) has sent its former spokesperson, Ms. Marilyn Ogar and 43 other senior officials, including two directors, on compulsory retirement.

A signal from the leadership of the DSS, issued Wednesday night, confirmed the development but did not reveal the identities of other officers affected by the exercise.

Ms Ogar was promoted Deputy Director alongside 44 others in the twilight of the Goodluck Jonathan administration.

But the new administration reversed the promotions, citing irregularities and breach of extant rules guiding such actions.

Ogar was said to earned her promotion following the commendation she received from former President Jonathan for doing “a fantastic job” as spokesperson of the DSS.

The erstwhile spokesperson was said to have been transferred outside the Abuja headquarters of the Service shortly after the change in government.